My father was a child of Harlem.  The Black Mecca, Home of the Harlem Renaissance, the world famous Apollo Theater, Sylvia’s soul food restaurant, several hip-hop pioneers, and many generations of Black families who like ours, came North from Trinidad or Suriname like my father’s parents, or the Deep South like my mother’s parents, and from everywhere else to help build this great nation.  My father LOVED Harlem.  He would tell me stories of how he used to run the streets at all hours of the night, shooting pool or dice, of how my grandfather would blast calypso music in the streets for the summer block parties, of how he saw another son of Harlem, the notorious gangster Ellsworth Bumpy Johnson walk these streets like he owned them, of all the times he himself spoke from corner to corner, against the Vietnam War, in support of Black Liberation or the class struggle, of all the times he saw the great Malcolm X do the same, from corner to corner, mosque to mosque, including that sad Winter’s day at the Audobon Ballroom, when Brother Malcolm was taken from us just a few months before his 40th birthday.  I am blessed to have had 32 years with my father, born at the height of the great depression in 1934, only leave me after more than 81 years of life, warm in his bed and without pain.

Far more than a lifelong social and political activist, his greatest work was at home as a father.  Daddy was not always debating, running for office, lecturing or being interviewed on radio or television.  To us, he was not a comrade, a Trotskyist, or a scientific socialist as he loved to call himself, but he was a father, an uncle, a brother, a cousin, a friend.  And it was in these roles that he endeared himself to us and meant the most in our lives. The man who picked my oldest brother Daryl up when he fell off his tricycle in Morningside Park was not a politician, he was our father.  The man who carried me in his arms after jumping my bike on a ramp, like Evel Knievel, or after falling out of a tree wasn’t the socialist candidate for mayor of New York City, he was my father.  The man who gave my brother Khalid the courage to face the school bully, and eventually become the one who bullied the bullies whenever they picked on anyone else wasn’t a political scholar, but our father.  The man who lovingly took care of my mother Zakiya when she was well and even more so during her final days was not a philosopher, he was a loving and devoted husband.  It was not a Scientific Socialist who mentored and disciplined and helped raise me and Khalid; Kwame was our father first.   These relationships with him were what made the man in our eyes.  He achieved so much as an international political activist because of the strength of character he possessed, that he showed us as a father, as a husband, as a brother.  Kwame worshipped no god, and neither did he want to be exalted as one.  He taught my brothers and myself to be our own leaders, our own teachers, to think for ourselves, and never to follow any man or any cause blindly.  Self-empowerment, self-reliance, and the education of self are the most powerful parts of his legacy that have carried me in life. 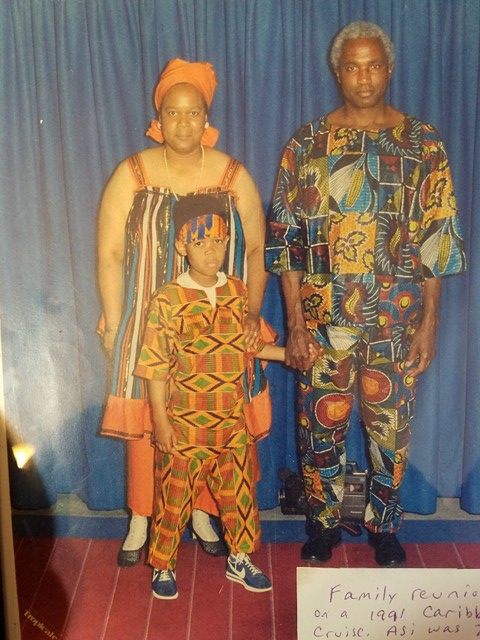 In 81 years my father touched so many lives.  His many decades of political activism and teaching may be how he is known to most, but I knew him first as dada, daddy, then pop, and finally as “old man”.  My earliest memories of my father are of him reading to me every night before bed, sometimes I would ask him to freestyle and make up a story on the spot.  No matter how tired he was he was always able to spin an engrossing yarn about dinosaurs, ancient cultures, adventures, parables about the world we live in… and on nights when he was working too late driving his cab, on weekends or holidays, he would have books on tape ready to go.  Daddy was always taking me somewhere to stimulate my mind and curiosity: the museum, the library, the Exploratorium in Golden Gate Park, the Lawrence Hall of Science… We would devour books together, and take breaks to go on long bike rides and runs around Oakland, stopping to do pushups and pull-ups anytime we came across a bar or bench… He would always push me a little further each day, telling me when I started getting tired, “you must have a strong mind and a strong body!”, a valuable lesson reminiscent of the samurai code of being a warrior-scholar, as daddy most certainly was, and a lesson that I’ll pass on to my children one day.  He may not have said it to me often, but I always felt the power of his love throughout my life as I do now.  In fact it wasn’t until I was 24 years old, when my girlfriend at the time, after I told her that my father and I had never said that we loved each other, at least not that I could remember, made me pick up the phone and tell my father immediately that I loved him, which I did.  He was so surprised that he just said “OK” awkwardly and then hung up the phone.  He then called me back a moment later, and said, “I love you too son, and I am so very proud of you.”

As a boy, on the way to school, every now and then he’d get tired of my hip-hop radio stations and make me listen to news of the world.  After my anger at being deprived of my daily MC Hammer and Michael Jackson songs subsided, we would have discussions about current events to help expand my world-view.  He wanted me to understand that everything was political, to see how the levers and pulleys of the global power structure operate to influence our lives and the lives of others half-way around the world.  He wanted me to see the world not only through my own eyes but through the eyes of people the world over, to feel their pain, their joy, their triumphs, as connected with my own.  Through this, I learned empathy for the human condition, both for what I could feel and see with my own eyes, growing up in East Oakland and San Francisco, and what I could not see first hand, in distant places like South Africa, Mexico, France, or Palestine.  Father taught me that those lives, those struggles, those stories of sacrifice, life and love were just as important as my own.  He taught me to be my own teacher, and to be curious and always question everything, to think critically and scientifically about everything.  He revered science, hard work, honesty, and integrity.  My father was not without his flaws, as any man.  He sometimes let his passion get the best of him, for better or for worse.  The stubborn West Indian gene was strong in him, lucky for me it must have skipped a generation.  But he never wavered in his love and devotion to his family, or to the timeless and universal struggle for self-determination and liberation.

In addition to these lessons, he taught me the many lessons of manhood, both directly and by example.  To say what you mean, mean what you say, to follow your handshake and always keep your word, to spend time with and work tirelessly to provide for your family, to love and respect your wife.  To be a man of ideas, to never compromise your beliefs or integrity for any reason, to act with conviction, courage, and compassion, and most importantly, to never forget to laugh.

My father fought his entire life for the rights of the oppressed, bringing me with him to marches, meetings, and demonstrations throughout my youth, showing me what it means to be completely and utterly devoted to a cause or a dream, to live it, to breathe it, building your vision each day through collective work, dedication, and most importantly through daily consistent action.  To teach me the power of unity, the power of people coming together, he would hold up his hand and say:  “ One finger on its own can’t do much. It’s small, weak, easily broken.  But when each finger comes together to make a fist, it becomes powerful, ready for a fight”….

My father would want his legacy to be not of grief, but one of unity,  of passion, of happiness, action, of bringing people together of all colors and backgrounds, and honoring our place in the “human family” as he liked to call it.  I will use his legacy to fuel me in my studies to become a Doctor and to be the best man and father that I can be.  I will use the willpower that he instilled in me to work each day to be a better man than I was yesterday, stronger in both mind and body.  I encourage all reading this to choose a piece of his legacy to take with you into your own lives, both in the small daily interactions with those whom you love, and on the broader scale, in building your dreams.  Remember to be both fearless and introspective in the process, and let nothing hold you back.

2 thoughts on “A King’s Birthday”